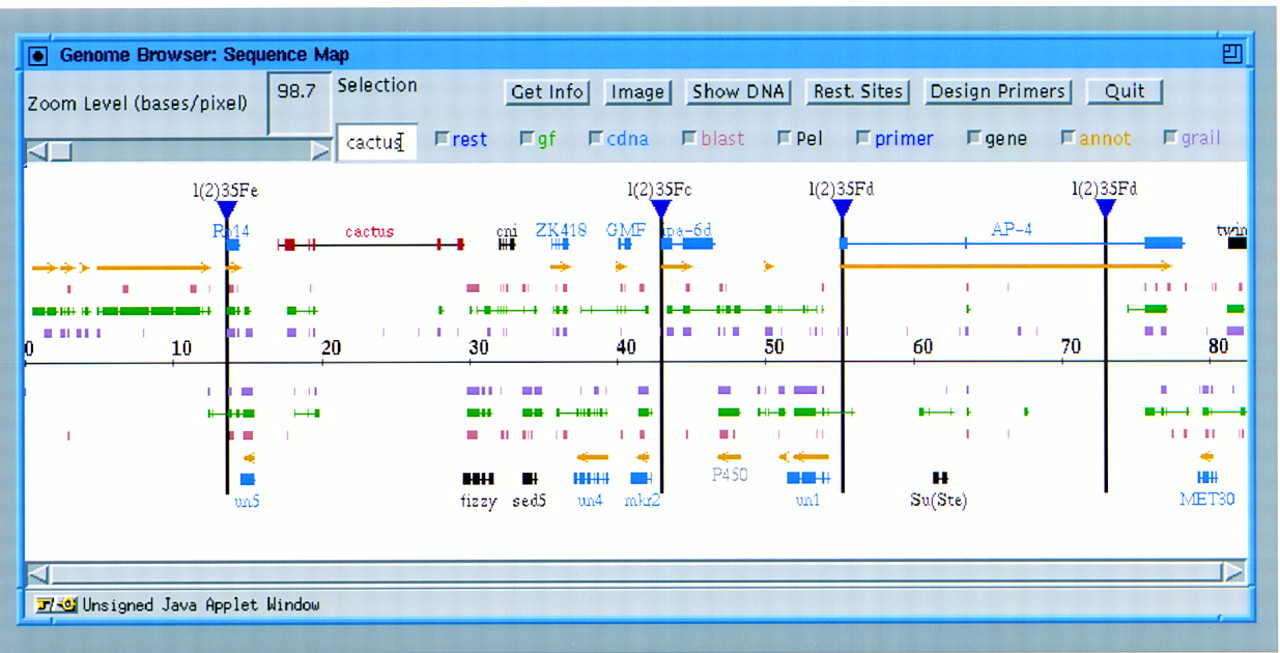 Figure 2 Annotated sequence map. The sequence map widget is shown above at the lowest level of resolution (i.e., the zoom control is set all the way to the left). The P1 clone displayed here is a gene-dense 83-kb clone (GenBank accession no. L49408) that the BDGP is using as a testbed for computational and experimental sequence analysis methods. The cactus locus has been selected. The sequence map displays the length of the DNA shown in a kilobase scale along the horizontal axis in the center of the display. Many of the features have directionality (i.e., they are present on either the forward or reverse strand). Therefore, features on the forward strand are displayed above the axis, and features on the reverse strand are shown below the axis. Vertical lines represent P-element insertions that inactivate essential genes and that have been mapped to the exact nucleotide of the insertion are also shown (Spradling et al. 1995). GenBank entries for known genes in the region are shown in black labeled with the gene name. The intron/exon structure of known genes are represented as black boxes (exons) connected by black lines (introns). Similarly, gene structures determined by comparison with cDNAs sequenced by the BDGP are shown in blue. Putative exons identified by gene prediction programs are shown as purple boxes (Drosophila GRAIL) or as green boxes connected by lines representing introns (Genefinder). The results from TBLASTX homology searches are shown in maroon. Gold arrows depict annotations added by human curation; these correspond to previously uncharacterized genes predicted by biological data and computational analyses. The vast majority of these predictions were later confirmed by isolation of corresponding cDNAs from a Drosophila cDNA library (L. Hong, D. Harvey, and G.M. Rubin, unpubl.).